A Tour of Cley

The Norfolk village of Cley is no longer ‘next the sea’, as the channel which led to its quay has long been silted up. The quay, which lies alongside Cley windmill once enabled a busy trade in wool to be conducted through the village, making it only second to Kings Lynn in importance as a port in West Norfolk.

For many, the village is just a bottleneck on the A149 between Hunstanton and Sheringham – parked cars along its narrow main street prevent the flow of two-way traffic in places. But if you park in the free car park at the back of the village and venture out on foot, your efforts will be rewarded. 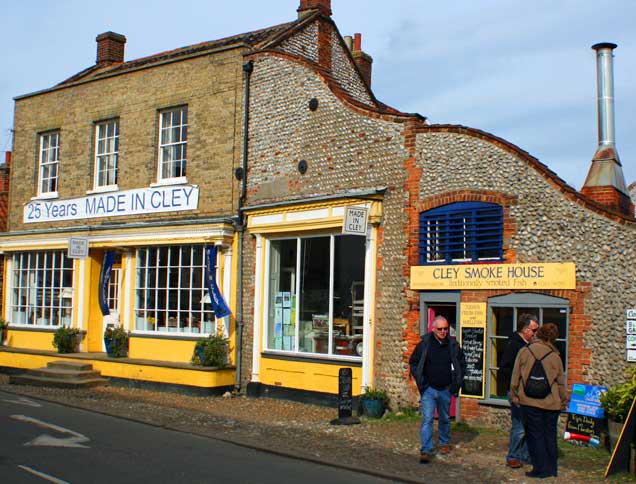 The main street is lined with some interesting buildings, among them the Cley Smokehouse for smoked meats and fish, Picnic Fayre an extremely well-stocked deli, and Cley Pottery. For refreshment, pop into the George hotel with its cosy bar and restaurant, which offers rooms with ‘marsh views’. Opposite the Crabpots Bookshop, take the alley leading to Cley Windmill – the windmill is run as a guest house and function centre and is only open to residents, but it has a shop selling local souvenirs, and you can get a close-up view of the once-busy quay and marshes.

A short drive out of the village on the A149 towards Sheringham, a sign indicates the lane to the left leading to Cley’s shingle beach. On popular days a car-parking charge is levied by the Norfolk Wildlife Trust. To walk along the peninsula to the Blakeney Point Nature reserve, face the sea and turn left. Walk along the shingle beach for about two miles. The beach becomes sandier as you reach the Point. Continue walking to the old lifeboat house. From the lifeboat house walk north along the boardwalk. This will take you back to the beach. On your walk you will notice some of the unique birdlife of the Point and may even spot some grey seals. However be aware that, to protect the seals during the breeding season, access to the western end of the reserve is prohibited between the beginning of April and end of August. During your walk, watch the sea carefully as you might spot the bobbing head of a swimming seal. Also, look in the other direction across the channel for fine views of Cley and Blakeney.

About half a mile from the village on the A149 to Sheringham is Cley Marshes, which is renowned as a superb bird-watching site. If you are not a member of the Norfolk Wildlife Trust, you can buy a ticket to visit the reserve from the visitor centre perched opposite on the other side of the A149. For more information, see Cley Marshes Nature Reserve.

The visitor centre is worth visiting whether or not you are a bird enthusiast, as it has spectacular views over the marshes, a cafe selling wholesome fare and a shop selling gifts and books. There are also audiovisual shows about the local wildlife and coastline, and a remote camera, located in the reserve, which you can control from the comfort of the centre to zoom in on the birdlife.

The centre was designed to be eco-friendly and collects water from its moss roof to flush the toilets, as well as generating its own power through a wind turbine and solar panels.